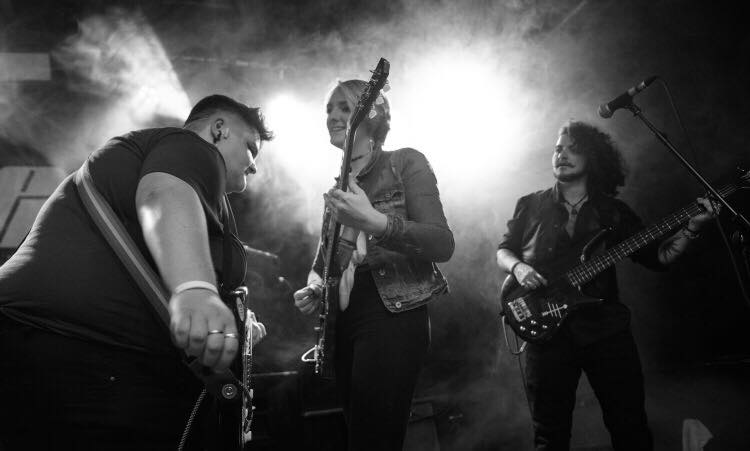 Hunting Hearts are yet another independent local Southampton group making marks in the alt rock genre. Sitting somewhere between punk, indie and old fashioned rock and roll, their EP Pride Not Prejudice, released in August this year, is full of emotion and rocking rhythms. Hunting Hearts’ widely known tagline is “We’re here, we’re queer, and we’re proud to show that the world of LGBT+ people have a voice too… and we’ll use it to rock your bloody socks off!” and rock they certainly do. They also provide general support and representation for the local LGBT+ community and have a dedicated section on their website for resources.

Hunting Hearts features vocals and guitar from Beck Lombardi, also known for their work in local alt rock group Threat System, and their vocal work in Pride Not Prejudice shows similar strength. The Pride Not Prejudice EP also features the tones of Kestral Gaian, who has since moved on from the band to focus on her work in LGBT+ activism and healthcare. Current epic and soaring instrumental work are added to Hunting Hearts’ music by Devin Valentine (bass), Lucy Rose (lead guitar), Matthew Wellspring (drums), and Sarah Leanne (backing vocals). Lead guitarist Lucy Rose is also a writer, and you can find out about her first published story here. A talented lot indeed, whose voices will be heard.

Pride Not Prejudice opens with Answering Machine, a fun, upbeat punky indie rock song with a sad message – “Now you’re just a ghost on my answering machine.” The song features a fab guitar solo and some soaring harmonies. It has a very punk feel in that it just jumps right in without much of an intro, which I found a little uncomfortable on first listen, but I found it grew on me, in particular the catchy melody of that last line in the chorus. Hunting Hearts ran a campaign in the lead up to their EP release where they invited people to call and leave a message of support on their answering machine. I wondered whether there was any connection between campaign and song, but none is obvious.

Next up is Caught, again a driving piece with a poignant message; unrequited love for a friend. This song has a nice structure that keeps you listening and good contrast between the sections, pulling back to build up into an epic bridge and final chorus. I found this song both relatable and “danceable,” making it probably my favourite track on the EP. If you aren’t a fan of either mouth organ or accordion you might object to the keyboard tone used for the riff, but I think you might have to admit it’s catchy even so.

Collide slows things down a bit, and the melody isn’t going to surprise you, but it might make you feel big things. There’s some fantastic vocal work in this, from near-whispers to belted, clear, held notes and parts with just enough grit to convey the right emotion. Put simply, this one is a love song.

Not a Number strips things back, starting out with just acoustic guitar and vocals, and adding the other instruments and voices until everything builds to a crescendo. Kestral Gaian sings lead on this track, and leaves the band a wonderful legacy with it. Something about it reminds me of Crowded House, a band I was rather obsessed with for a while in my uni years. Human beings aren’t numbers, friends.

The final track, From Underdog Kids, to Every Rad Fem, rocks along with a super catchy melody and rhythm – you could dance around the house to it for sure, just don’t be a TERF. Listen to the words and you’ll realise this song is throwing punches. It would be easy to sound like an essay or blog post when writing lyrics for something like this, but Hunting Hearts clearly have skilled lyricists among them, because it comes across very smoothly. You can bounce to it and hear a strong message at the same time.

Hunting Hearts are well known around Southampton and further afield, and with a strong style and cause I think they will continue to bring music to our ears for a long time to come. I’d encourage all rock fans, LGBT+ folks and allies to follow them on their social sites below and give Pride Not Prejudice a listen. You can also support them by buying physical copies of their EP via Ad Fundum. Hunting Hearts are a collection of strong voices, willing to stand up for those who need it, who just happen to also be musicians, and use this as their medium. You’ll be wanting to feel strong and ready to make a difference too, so my tea pick while you listen to this would have to be a bold Assam or the tea a friend once gave me as “Armageddon tea” (you had to be there) – gunpowder green infused with peppermint oil.