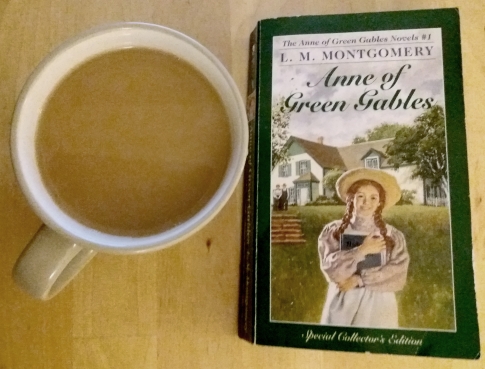 A while ago, trawling through Netflix for something to relax by, I came across the series Anne with an E, based on the Anne of Green Gables books by L. M. Montgomery. At the time I had not read any of the Anne books although I had loved Emily of New Moon, which was gifted to me by someone I’m very close to who adores the Emily stories. I was warned off the TV series by die-hard readers of Anne of Green Gables, who had been told it was not very true to the story, but I persisted, and found the series delightful. Of course, I knew I had to read at least one Anne of Green Gables book in order to assess the appropriateness of the television series to the original story. Luckily, a friend decided to gift me the first Anne book only months later, so I was able to follow through with this plan.

If you’re someone who dreamed of being a writer as a kid or just loved words and literature, then L.M. Montgomery’s main characters, Emily and Anne alike, will feel familiar and quickly gain a special place in your heart. Anne also has an “over-the-top-ness” about her which makes me cringe with embarrassment but endears her to her adoptive family and readers alike. The actress playing her in Anne with an E portrays this behaviour absolutely perfectly, and the opening episodes are in fact very true to the story in the book, with Anne being enraptured by all the same things and expressing herself with the characteristic intensity we expect. She is wonderfully observant of beautiful things in nature, a feature she shares with me and friends who love her character. Like many children in literature, she displays an endearing honesty;

“I behaved well, just as you told me. Mrs Lynde was gone, but I went right on by myself. I went into the church, with a lot of other little girls, and I sat in the corner of a pew by the window while the opening exercises were going on. Mr Bell made an awfully long prayer. I would have been dreadfully tired before he got through if I hadn’t been sitting by that window. But it looked right out on the Lake of Shining Waters, so I just gazed at that and imagined all sorts of splendid things.” – Anne, regarding her first experience at Sunday school, pg 81.

Of course “The Lake of Shining Waters” is one of Anne’s many made-up names for places that she feels need a more descriptive or beautiful name than the plain one they have been given. I think many of us who had vivid childhood imaginations and enjoyed playing with words can understand this too. This aspect of Anne also holds true in the television series. Marilla is also extremely well played in the television series and very true to her book character. Matthew differs from his physical description in the book, but is very like in behaviour. As far as I was concerned reading the book, the actors in the series did an impeccable job of these central characters, and truly brought their descriptions to life.

Anne with an E puts more emphasis on the “story club” and woodland playhouse that Anne and her “bosom friend” Diana create. In the book this endeavour is only mentioned fleetingly. In the TV series this becomes a new focus for the plot and a safe place for the creatively inclined children to gather and share their work and ideas. Among them is an additional character, a young budding artist, Cole MacKenzie, who the plot later reveals to be gay. Whilst this character is an addition made by the TV series, and the plot from this point diverges from the books in many ways, with the playhouse being destroyed by bullies, and Cole becoming a featured character, something to me felt right about the TV series choosing to depict issues of discrimination and diversity more directly. The series also introduces racial issues with Gilbert Blythe returning home with a new friend, Bash, who is discriminated against by others in the community on the basis of race. I felt that the spirit of resilience and feminism existed in the book, and that in enhancing the degree to which the TV series represents diversity and addresses issues of equality, the story was only improved.

I don’t think it could be said that either book or series is a superior story. I enjoyed both thoroughly, and feel that whilst the series does diverge from the plot depicted in the book, it seeks to represent the characters and the emotions of the original story in a very true way. Those who have grown up reading the books might find the alterations strange, but to me they felt more like a modernisation which shines the spotlight on issues that would have been there in the era and context of the books, but are not examined in detail in Montgomery’s work. In a way I feel this was a better choice than trying to rigidly recreate the events of the book, since it’s always impossible to include everyone’s favourite moments, and as such there is a lot of scope for disappointment. Instead, the creators have produced a piece of art of their own, inspired by the Anne of Green Gables books as a starting point. I would read more books from the Anne series, but I feel more in love with Emily of New Moon, whose focus on becoming a “poetess” is close to my heart. As for the television series, I do hope there is more.

Don’t do what I did and just absorb these stories with tea alone. Anne Shirley would like you to read aloud or watch with a bosom friend beside you, and serve them your best baked goods and tea of many kinds whilst you do so.